ONE NATION AND ONE ELECTION 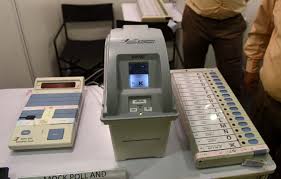 ONE NATION AND ONE ELECTION; I agree to ONE NATION in diversity of religions and beliefs, to live in peace and accept constitution as bible, quran etc. Religion is congregation of same thoughts and customs of living which helps the believers of same religion to practice religion and live in peace. Further if one religion has the right to live in peace in his/her religion, others have also have also the same right to live in peace. HENCE COHESION , UNDERSTANDING AND ACCOMMODATION OF DIVERSITY IS ESSENTIAL AS A NATION AND IT IS BUILT ON THE INDIAN CONSTITUTION. 2. AS FOR ONE ELECTION, I beg to differ as I believe it will create monopoly and perhaps make the elected representatives and the governing ones lazy, inattentive to what they committed in the election except a year or so before elections. ANSWER to put them on TEST, I think assemblies elections should be held 2.1/2 years after the Parliament election. Hence 2.1/2 years are enough for the governing party to show results of their commitments and get to the ground in Assemblies elections to prove what they have done as per their commitments and how the electors evaluate them. 3. BYE-ELECTIONS; these must remain vacant and elections for these bye-elections should also be held during Assemblies elections which I think will give enough time to the governing party to concentrate on execution of their commitments.